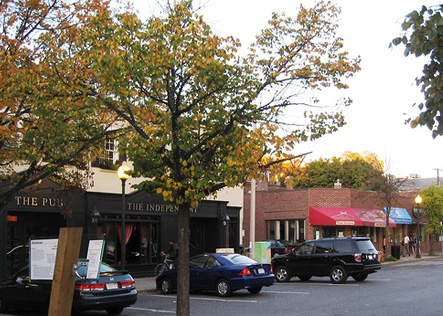 Located in Somerville within Middlesex County, Assembly Square has unbeatable proximity to the Boston and Cambridge population and tourist hubs. This is a regional market of extraordinary population density, affluence, and sophistication. Just minutes outside of downtown Boston, Assembly Square is easily accessible by car, train, bus, and even bicycle. The major surface artery Interstate 93 and Route 28 drop shoppers, residents, diners, and visitors at our doorstep via car or taxi. Upon arrival you will be greeted with ample parking. A dedicated Assembly T stop on the Orange Line, provides access to and from Boston in just minutes via the MBTA. Bike paths connect to the Minuteman Rail Trail connection, giving cyclists access to Bedford, Lexington, Arlington, Cambridge, and Boston. Visiting from out of town? Boston Logan Airport and the Boston Cruiseport are just a few miles away.

Ball Square is a neighborhood primarily in Somerville, Massachusetts, but also extending into Medford, at the intersection of Boston Avenue and Broadway, located between Powder House Square and Magoun Square. It is primarily a residential area with a handful of shops and restaurants along Broadway. Located on the edge of the neighborhood surrounding Tufts University, Ball Square contains a mix of businesses serving the student and academic populations as well as those reflecting the neighborhoods to the east.

Today, Davis Square is a mix of the old and the new. Restaurants, coffee shops, and stores catering to students and young urban professionals coexist with working class diners and tailors that predate Davis Square’s trendy period. The brick-paved square contains a rich mixture of shops, restaurants, bars, coffee shops, a 1000 seat movie theater complex, a smaller 200 seat live performance theater, and other attractions. In 1997, Davis Square was listed by the Utne Reader as one of the fifteen “hippest places to live” in the United States. In 2005, The Boston Globe reported the first million dollar condo sale in Davis Square, which marked a major shift for a neighborhood once known as affordable. It now contains some of the priciest homes in Somerville and is significantly more expensive than the average for eastern Massachusetts.

Teele Square is a mixture of local eateries and service-oriented businesses. Adjacent to Tufts University, Teele Square is an extremely walkable restaurant and retail center, brimming with college students and long-time Somerville natives. This small neighborhood attracts young professionals who appreciate a small town feel and easy access to various job centers in Somerville and Boston. Teele Square is only a 10-minute walk to Somerville’s well-known Davis Square and the MBTA Red Line stop.

Union Square is a neighborhood of Somerville, Massachusetts, located around the intersection of Washington Street and Somerville Avenue, about half a mile from Inman Square in neighboring Cambridge. It is an up and coming commercial center of a primarily residential neighborhood with many restaurants, bars and neighborhood stores.