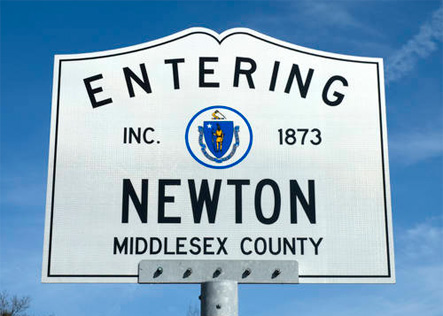 Settled in 1630, Newton, Massachusetts is a vibrant community comprised of 13 distinctive villages. Located just outside of Boston, Newton is well respected for the quality of education, community life, exceptional homes, and beautiful open spaces. Newton has frequently been voted as one of the 10 best communities to live in.

With a population of about 80,000 residents and approximately 26,000 homes, the City also houses Boston College, Mount Ida College and Lasell College. The Boston Marathon runs right through the City with Heartbreak Hill beginning next to City Hall. The Newton Free Library is well respected as one of the largest, most well equipped libraries in the Commonwealth. By size the city is 18.3 square miles bordering the communities of Brookline, Brighton, Watertown, Waltham, Weston, Wellesley, Needham and West Roxbury. Newton also has east–west and north-south highway infrastructure with Routes 90 and 95 running through the city.

When Oakes Angier opened a tavern around 1726 at the intersection of some of Newton’s first cartways, he knew what he was doing. Angier ran the tavern long enough for the community to become known as “Angier’s Corner,” with stage coaches and the Boston and Worcester Railroad passing through. The name changed to Newton Corner after a local commuter service station was built in the 1840s. Currently, the village’s Exit 17 on the Mass. Pike offers convenient connections to and from downtown Boston.

The village of Nonantum started as a small industrial complex of paper mills, including Nonantum Worsted Company, which gave its name to the neighborhood in the 1880s. Its nickname is “the Lake.” Today, however, Silver Lake—shown in an 1874 map bounded by Nevada, California, Watertown, and Bridge streets—has been filled in with homes and businesses and resembles a swamp more than a swimming hole.

Developed after the Revolution, Newton Upper Falls was home to the sawmill that in 1688 used Newton’s portion of the Charles River as a power source for the first time. Eventually the town became a prototype of the self-contained New England mill village, as textile mills, iron works, and machine shops brought workers and their families to the area. The area still uses the mill buildings for retail and commercial businesses.

Newton Lower Falls had an advantage over the other villages from the beginning. Since the late 1600s, two major east-west highways, the roads between Watertown and Natick, and from Boston to Sherborn, had met there before crossing the river. There were inns in the village before the Revolution, at least one store before 1800, the first post office in Newton (1813), and, before the railroad spur was built in 1840, daily stage coaches to Boston, according to Newton’s official website. The town was also well known for its abundant paper mills.

After a surveyor was called in to determine the center of town in 1712, new roads were laid out and a new meeting house eventually replaced the one built by south Cambridge residents in 1660. The “Centre” was developed as a school, stocks, a training field, and pound were built around Centre and Homer Streets. Though the town house was moved to West Newton in 1849, and the Centre lost its geographical claim following the loss of territory to Roxbury and Waltham, the village currently includes the largest commercial district of any of the village centers.

Though not the original site of the Town Hall, West Newton finally won the bitter debate with Newton Centre and hosted Town Hall from 1849 to 1932. The village grew up around the Boston and Worcester Railroad, becoming an early example of transit-oriented development. The current City Hall opened in Newton Centre in 1932.

As Newton’s first “railroad village,” Newtonville is now a thriving community that is pioneering a program to revitalize the villages. Originally a depot midway between Newton Corner and West Newton, the area contained only the Hull Mansion and a grain storehouse from Joseph Bullough’s grist mill for ten years. Once the commuter service began, however, house lots around Washington and Walnut Streets were auctioned and the community grew.

Two miles west of West Newton lies Auburndale, a cozy village that has the railroads to thank for its development. Though largely unaffected by the Boston and Worcester Railroad and the Charles River Railroad individually, Auburndale began to grow after the two railroads were joined to form the Circuit in 1886. Today, the village sports several local shops and restaurants and attracts commuters off the Massachusetts Turnpike.

Legend has it that still-hard-to-find Thompsonville was named for a hermit who lived in the nearby woods. According to local lore, the village, near Newton Centre, traces its roots to Joseph Thompson, a recluse who lived in a cave in Hammond Forest. But documentary evidence about the village’s origin is scare. The legend “cannot be substantiated at this time,” said Sara Goldberg, Historic Newton’s curator.
Chestnut Hill

In 1845, retired sea captain Joseph Lee left his 165 acres of land along the Newton and Brookline border to his nieces and nephews. The problem? Without a railroad system and development of any kind, the property did not have much to offer. It was not until 1850, when Beacon Street connected Newton Centre with the Back Bay, and the Charles River Railroad was extended two years later, that Lee’s heirs began building houses and a new community—Chestnut Hill—around the farm.

Newton Highlands’ railroad station was built before the town, when the Charles River Railroad was extended through Newton in 1852. The track was mainly used by cars carrying gravel from Needham to fill the Back Bay until the early 1870s, when the railbed was upgraded and residents started developing the area. “Newton Highlands” was chosen as the village’s name at a meeting held specifically for that purpose. The Green Line T stop currently lies on the old station’s site.

Until 1886, four farms covered nearly all of present-day Waban village. Once the Circuit Railroad was created, real estate developers recognized the area’s potential and began to develop it with subdivisions, houses, and stores. The station was built near the old crossroads of Beacon, Washington, and Woodward streets, and was named by William Strong who had lived on Nonantum Hill near the site of the vanished village of Waban and the Praying Indians.

Oak Hill, the last of the villages to be developed, has a network of streets named after veterans, as it owes much of its growth to the development of affordable housing for returning WWII veterans. The city agency that oversaw the construction named the 33 streets and paths in Oak Hill for some 200 local veterans killed during the war.